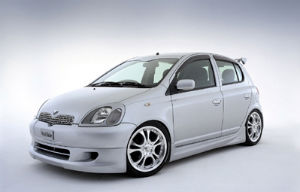 I have been accosted by many a person about my apparent disdain towards a particular car; The Toyota Vitz. This marvel of technological advancement (as I came to learn recently) has been a thorn in my side for a while now. Very little about it makes sense; not its size, definitely not its name and certainly not its popularity.

I have always known that the proof of the pudding is in the eating and to be fair I was yet to take a bite of the pudding that is the Vitz. Therefore, my knowledge of the thing was based purely on bias from self. I had also decided that if something looked like a duck, swam like a duck and quacked like a duck, it probably was a duck. The Vitz looked, moved and sounded like a boda boda ergo I was not going to give it the time of day to prove itself otherwise.

I was however overtaken by the overbearing conviction to be objective. Why not give it a chance I thought? Would it really hurt if I took the darned thing out for a spin? Maybe I would be spotted by one of the now infamously wealthy golden handshake recipients and be offered a new car on the premise of looking like a charitable case. It has also been a rather dry month so the probability of getting caught in a storm that would blow the car into a tree, was really low.

So I did just that. I borrowed a Vitz from one of my friends, said a prayer, apologised to my ancestors for putting our family to shame and got down to it.

Shock is a feeling that rarely made its way into my life, but alas, it was only because it had been saving itself for this day, only to come overflowing and flooding as if to compensate for its erstwhile absence.

For starters, I was baffled at how something so small could have so much space on the inside. A form of modern sorcery. Perhaps it was the Japanese attempt at a Trojan Horse. I fathom that it can carry 5 grown men of decent size and build comfortably within its deceptively sized cabin. I then put the key into the ignition and heard it come to life, proving me wrong yet again; it had a motorised engine and did not run on pedals.

As I drove through the busy streets of Kampala, thankful that this particular car had tinted windows to hide me from the public view, I was surprised that I was comfortably able to go over what I thought was its speed limit of 20 Kph. It was a blissful experience overtaking boda bodas that until then I had thought were more superior in performance to the car.

The driving experience was wonderful to say the least. It was also amazing to discover that the Japanese witchdoctors that made this car, had managed to somehow fit this tiny little contraption with the same amenities and fittings that normal cars have, like a functioning car radio and air conditioning.

And when I was done with ride and it was time to return the car, I was dreading the fact that I would have to struggle to find parking on Kampala road as that is where I was to leave it. Fortunately, I was just in time to find a cyclist leaving a parking slot and as luck would have it, I was able to fit the car right there where a bicycle had been previously parked. How that was possible, I will never know. The car would just not cease to amaze me.

Friends it was as clear as day, the Vitz was and will perhaps continue to be a spectacle of engineering. The pros evidently outnumbered the cons. I had been forced to eat humble pie and was this close to admitting my faults in judgement when a child in the company of his mother pointed at the car as I was stepping out and said to its mother “Mummy, why is that man driving a toy car?”

At least I tried. Now back to regular programming.

4 thoughts on “WHY ALWAYS THE VITZ”